Behind his brash, rough exterior, are kind eyes. 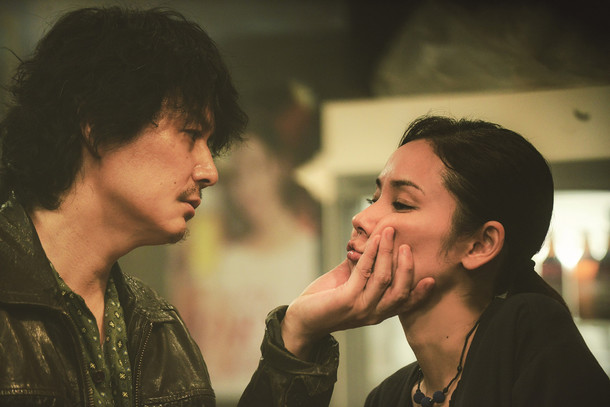 Scoop! is a hilariously entertaining film that sparks bursts of joy and delight, sprinkled with small doses of serious lessons on mental illness, debt, and fear.

This was an unexpected surprise wonderfully captured by the brilliant actor Masaharu Fukuyama who has strong camera presence and gives his all to the beloved character of Shizuka.

Masaharu Fukuyama transforms effortlessly into the role of an aging paparazzo — but what is special and impressive is his presence lingers long after the film has ended. His energy and vigor reminds me of the wild authenticity of Oscar winner Nicolas Cage who embodies the fun-loving challenge of playing a variety of interesting unlikely roles.

Shizuka is paired with a ‘green’ rookie reporter, Nobi played by Fumi Nikaidô and they are tasked with obtaining the exclusive celebrity Scoop! Their witty banter and chemistry amuses …

It can be intimidating playing opposite Masaharu Fukuyama but Fumi Nikaidô remarkably stands firmly on her own.

Intimate scenes in a comedy are difficult with many attempts coming up empty. It was however a blast of freshness to see the care and tenderness director Hitoshi Ône has taken.

He embarks on the early stages of sensual foreplay that is beautifully lit as a memory. This was not comedic in any sense but instead is personal and spectacularly captures Nobi’s feelings and her point of view.

It boasts the talents of the direction, the camera work, and the editing. The entire film crew is worth mentioning here because it feels like they all had fun filming and as a result, it positively shows onscreen.

A Film that Plainly Speaks Volumes about Friendship and Loyalty.

With a lot of hype, buzz, and critical acclaim surrounding the film Moonlight, there is sometimes a dread of is it really that good?

The answer: Yes, it is that good and more! What was impressive was the generous camaraderie of each and every character who stepped up and trusted the scene — they shared subtle nuances, while seemingly jumping head on into the scenario wholeheartedly. Most importantly, all were being present: they were re-Acting.

This was an honest performance piece, and the ensemble is as good as it gets. The cinematography played beautifully at capturing indelible moments that stay with you long after a few weeks, and even many months after. Kudos and congratulations to the entire cast and crew, especially to Naomie Harris who it has been said shot all her scenes in only 3 days?!

I am not sure what I expected Moonlight to be, but it left a major mark and is a film to treasure as one of cinema’s best written and directed by the very clever Barry Jenkins.

Trevante Rhodes is The One to Watch!

I don't think that my films are literary; they are based on the most ordinary things of life.

Drama is life with the dull bits cut out.

On The Beach At Night Alone

This would seem to be a classic tale: a story of forbidden love and a lost soul. No heartbreak compares to a love that suffers in the eyes of society that is deemed ‘wrong’. Glimpses of a Woody Allen-esque style and flavour appear in the film. However, it is the remnants of the brilliant Eric Rohmer that I see from the very early scenes of this masterpiece.

I say masterpiece because it takes a fearless director to tell a story to its highest truth. This felt more like ‘real life’. It felt like live theatre. It had guts in its staging and the performances of each character, however small it maybe — worked. I felt transported into the middle of their scene and it was uncomfortable. This film does not feel like an act.

The bold performance of the lead actress Kim Min-hee wins her Best Actress @ Berlinale and is so very well deserved!

Her pain, her suffering and longing for a love that cannot be, hurts and is brave. The very subtle differences are captured in the stillness of the camera, where the director allows his leading lady to shine. The minimalist set is kept clean, filtering a rawness and documentary-like state that is meant to feel ‘real’.

This is the very first film I have seen of this director and I can’t wait to revisit his past films.

As Alfred Hitchcock has said time and time before, film is about the story, the story, and the story.

This work may possibly feel too close to home — as it seems to mirror their true life situation. They are speaking their mind, and the heartfelt words come alive and are meant to cut deep. The script comes from a place of true pain and heartache.

Like the classic tale of Romeo & Juliet yearning to love one another even if it is the wrong place, wrong time, wrong person. I do hope there will come a time where people can be supported and they are free to choose who they love without fear.

We live in a crazy strange world where one is truly lucky to find and meet someone to love in their lifetime; and this message is what the director projects in this film.

This film for me is something all filmmakers have to see. Director Hong Sang-soo and his muse Kim Min-hee are the team to Watch!

“I’m the kind of person who needs to live alone.”